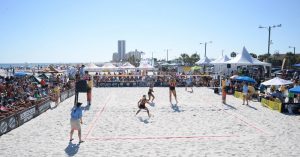 Lexington, Ky. (March 2, 2017) – On the eve of the sixth season of competition for NCAA collegiate beach volleyball, the AVCA notes that over 1000 women are participating at 64 Division I, II and III institutions and 50% of those participants are exclusively playing beach volleyball.

Beach volleyball was added to the emerging sports list by the NCAA’s Committee on Women’s Athletics in 2009. The first season of competition took place during the spring of 2012, when 15 Division I schools added varsity programs. Fourteen more programs started in 2013 followed by ten more in 2014, triggering a transition to NCAA Championship status. Funding was approved in 2015 and the NCAA hosted the 1st National Collegiate Beach Championship in Gulf Shores, Alabama in May of 2016. This year, the championship returns to Gulf Shores on the weekend of May 5-7.  For complete press release, click here