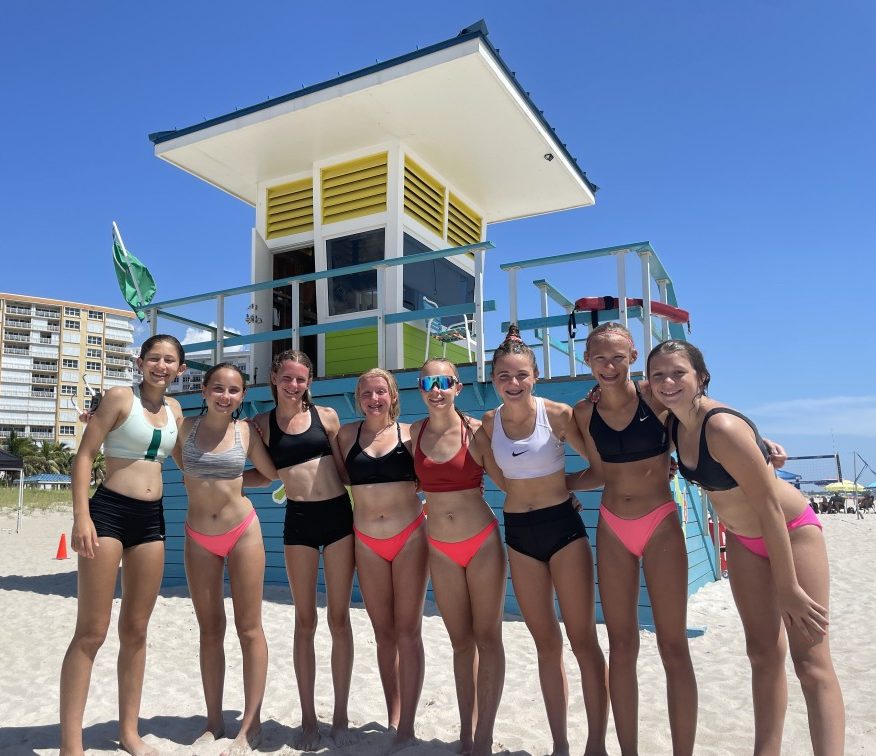 At TMP Beach, players develop an entire set of skills, not just a particular or specialized position.  Players touch the ball every play at least one time because they are involved in every volley in every set, acting as passers, setters AND hitters in a single volley.  In addition to the foundational skills and techniques, offensive and defensive strategies are effectively honed and curated. Mental fortitude is challenged and strengthened. The higher level performances are tied to personal growth and achievement, rather than a score or a coaches goal.

Karch Kiraly, author of Beach Volleyball and the current head coach for the women’s indoor National Team, speaks directly to why outdoor players make better indoor players: “More and more, indoor players are specializing.  For example, a 6’10” guy (or a 6’3″ girl) today will probably be put at the net to hit and block. There’s a good chance they will be taken out of the serve reception entirely, thereby given a very limited opportunity to defend, if at all.  They will never set the ball unless it comes to him by accident.  In contrast, that same big is going to learn defense and ball control in the sand, whether they want to or not.” The opposite also holds true for shorter or back row indoor players – they do not get a chance to attack or swing, as they are are usually taken out for taller players.

“You’ve made my kids great competitors. My daughter said on the way home today that she didn’t think she’d ever have been chosen to play at one of the top indoor teams in the state if she hadn’t played sand.” Jane, mom of a young athlete

“Thank you for putting on the ProjectU showcases, my daughter mentioned that this clinic was one of the best she has ever attended.” Brenda K, mom of a young athlete

“Thanks so much for putting on these clinics and tournaments.  My daughter loves beach volleyball and she loved the girls and the coaches this weekend.  It was such a great experience for her to get feedback from college coaches, so I really appreciate it.  Hopefully we will see you again in the future.” Sharman M., mom of a young athlete

“Just wanted to thank you for the clinic/showcase in KC. We’ve been to the big ones in CA and they were okay but felt like a needle in a hay stack. Hard to get noticed because there are so many plus they were mostly big schools- not everyone is a D1 player or wants to go to a large D1 school.” Sarah S, mom of a young athlete

“Hands down the BEST coaching experience my daughter has ever had!! Stephen is amazingly gifted in interacting with both the player & the parent…. smart,kind & fun! Better experience than any Junior Olympic or school coach than we have encountered.” Betsy, mom of a young athlete

“I also wanted to say thank you for how you interact with the girls. They are having so much fun with you at practice and the two tourneys. It makes me happy to see them learning and having fun.” Tina B, mom of a young athlete

“We want to thank you for all of your hard work and commitment to the team this year. Despite the adversity, you stuck with us and continued to make us better players, teammates, and people. For this we cannot thank you enough.” St. Johns University Men’s Club Volleyball Team

“After 1 session with Stephen my daughters confidence grew. We will definitely do more sessions with him.” Mike, dad of young athlete

“Thanks again for all your help, we will be keeping your number handy for when this season is done. The girls still talk about your recommendations after practice. They listened.” Brad, dad of two young athletes

“Coaches helped solidify love of volleyball and were so encouraging! There were small groups given individualized attention and great feedback at the end of camp.” Julia, high school athlete

“I just wanted to say thank you so much for believing in me and for training me this summer you made me remember how much I loved volleyball.” Niki K, high school athlete

” Stephen McCarthy is unlike any other coach I have previously experienced. His approach to coaching is very different from other trainers. Most coaches believe in the perfectionist approach, whereas Stephen McCarthy believes in “playing dirty”. This type of training prepares me for the unpredictable nature of volleyball on the court. Not only that, but I came to Stephen with a shoulder injury. After watching me play during our first session he was able to identify the origin of the pain in my shoulder, a feat that three months of physical therapy was unable to accomplish. Stephen McCarthy also has a terrific personality that makes our training sessions even more enjoyable.” Morgan S., athlete

” Hey coach, I just wanted to say thank you for everything.  If it wasn’t for the coaches believing in me and staying patient, I don’t think I would have the same hunger for the game that I have now.  Thank you for sticking with me. ” Raa, athlete

” My daughter is really enjoying the camp. She mentioned that there’s team-building and that she appreciates that the training seems to be centered around having fun vs doing endless drills.” Susan T., mom of a young athlete

“My previous coaches have been ok, but I was looking for someone who was as committed to my goal as much as I. Stephen is that coach and he has taken my game to a level that I never thought possible. He is flexible, smart, and patient. I would recommend him to any athlete.” Aaron O, athlete

“Stephen’s dedication to athletes of all ages and sport is unquestioned. He uses programs that benefit the athlete no matter the sport. I witnessed his work, not only did the kids improve from the conditioning and strength, they looked forward to doing them again and again.” -Colby Fuller, youth coach

“Stephen worked with my daughter after a high ankle sprain. He did more in 3 days then any other trainer had done for her in 10 days. The methods he used to get her walking again were awesome. Stephen is one who thinks outside the box and gets his kids back to the sports they love quickly and stronger. ” Marit L., mom of a young athlete.

“I highly recommend taking your team out to The McCarthy Project.  It’s an opportunity to be mentally and physically challenged to move outside the box to see life and the situation differently.  Your team will know each other better and trust one another more.” Tess Cruse of DIVI

“I wanted to drop a note with my recommendation of Stephen McCarthy and his athletic training program. I have coached for 22 yrs at all levels and have witnessed multiple training programs throughout those years. After tracking the success of several players Stephen trained and the results have been excellent. The strength and endurance of these players that have trained with Stephen has increased their overall effectiveness as a complete athlete. They have increased their speed and overall quickness. Stephen’s training has been an overall success and I would recommend him to all players looking to achieve a higher level of play and athleticism.” Derek P., Pro, College and High School Coach